Samuel seems to be recovering fairly well from his most recent surgery!  There is still a long road to walk, and lots of answers we don't have yet, but we are so beyond grateful that God chose to reveal the mystery of Samuel's GI tract! 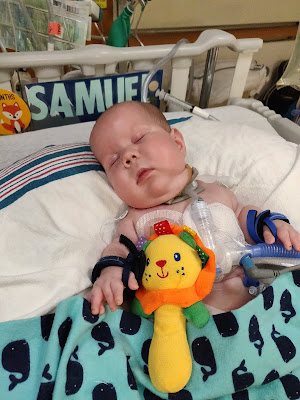 Samuel has been requiring less frequent pain meds each day since surgery, and this morning - right as he was placed in my arms for morning snuggles - Samuel gave his first post-surgery smiles.  We had prayed just this morning that God would allow Samuel's joy to return, and He so graciously allowed that to happen!
Other good news?  The drainage from Samuel's G-tube has decreased and lightened in color, and the drainage from Samuel's ostomy has increased!  Both of these are good signs that his intestines are finally clearing out (after 2+ months!) and that things are beginning to move more in the right direction!  I cannot adequately describe how much better Samuel's belly looks.  It went from looking so round, like his skin was pulled tight around a bowling ball, to being soft and actually having a bit of a flat surface to it instead of a mountain peak!  His girth went from measuring 46 cm to now being 39 cm and still dropping!  This morning they clamped off his G-tube (which has been open to gravity most of the past 2 months) to see how he does.  If he does well with this, then we are one step closer to starting feeds!