I had always heard that life in the NICU is a rollercoaster, but I never could have imagined how true that is.  These past 12 days have been full of ups and downs, and I'm sure there will be more to come.
If you read my last post, you know the miracle that God has already performed on Samuel's heart!  We are so grateful and in awe of God's power and answer to our prayers!  We learned this incredible news on Friday, and we we're overjoyed.  We never would have thought that we would almost lose our precious Samuel David less than 24 hours later. 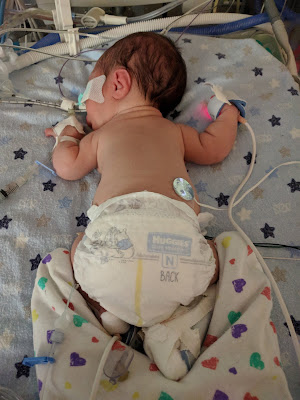 Early Saturday morning Samuel had an episode where his oxygen levels kept dropping for more than an hour.  Eventually his heart rate started dropping too.  Samuel ended up coding.  They had to give him compressions to get his heart going again.  They adjusted all of his vent settings but Samuel was still struggling to keep his levels stable.  They switched him over to a new ventilator, did an echocardiogram and an ultrasound, and put an arterial line in his foot so they could do frequent blood draws to see if his blood gas would indicate anything.  Samuel was showing signs of pulmonary hypertension, and his carbon dioxide levels were pretty high.  They started him on nitric, and switched him to an oscillatory ventilator to help bring down his carbon dioxide levels.  They also had him heavily sedated so that he wouldn't fight the ventilator, but would allow it to do the work so that his body could use it's energy to recover from the events of the morning.  It was mid-afternoon by the time they made the switch to the final ventilator, but his oxygen levels stabilized after that!  His carbon dioxide levels also began to drop, and he was relaxed and peaceful for the first time in a while.

Samuel is still heavily sedated and allowing the ventilator to do all of the work, but his carbon dioxide levels are in a good place, his oxygen levels haven't dropped at all since yesterday afternoon, and they are slowly turning down the vent settings.  His body seems to be recovering, and we are so grateful!  Right now they don't know exactly why all of this happened.  Their best guess is some kind of infection, so they are treating him with antibiotics while they wait for test results to see if there is anything there.

We covet your continued prayers during this time.  We are confident that God has a purpose in healing Samuel's heart, and we know that he is not done with him yet!


And I am sure of this, that he who began a good work in you will bring it to completion at the day of Jesus Christ.
Philippians 1:6

“Before I formed you in the womb I knew you, before you were born I set you apart; I appointed you as a prophet to the nations.”
Jeremiah 1:5

Please pray that Seth and I can find time to rest during these long, draining days and and nights.  Also pray that we would not get sick!  I can't imagine not being able to see Samuel for any length of time.