On Thursday we had a meeting with Samuel's 2 EVC cardiologists, his GI doctor, and the GI surgeon who did his G-Tube and Nissen Fundoplication.  This meeting brought a new direction to the table, as we were faced with another rare and unexplained diagnosis. 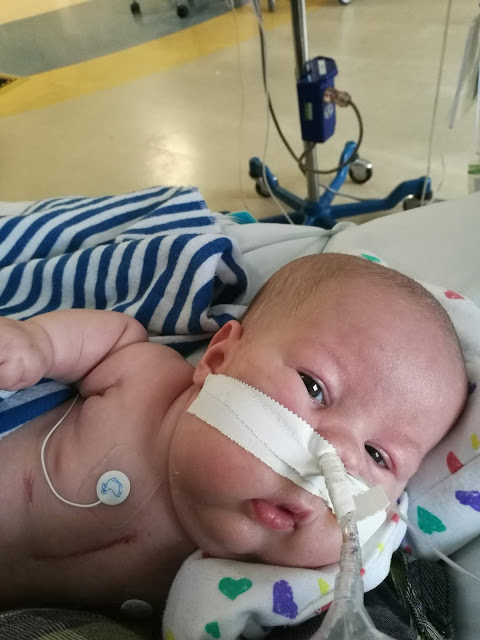 By process of elimination, Samuel has been diagnosed with Intestinal Pseudo-Obstruction, which kind of puts a fancy name to "we don't know what's wrong".  After a slew of tests, procedures, and medications, the doctors have not been able to find any obstructions in Samuel's intestines, while also ruling out some of the most common GI-related diseases that people are often treated for.  This leaves the reality that Samuel's intestines are acting like there is an obstruction, even though no actual obstruction is present (hence the name, Pseudo-Obstruction).  This is complicated by the fact that Samuel has EVC, which has never been known to be paired with GI complications.  The worst part about this diagnosis is that there really aren't any treatments because the underlying cause is unknown.  Prior to this diagnosis the GI surgeon thought Samuel might benefit from an ileostomy, but now they believe that surgery could do more harm than good.  They have tried several medications that usually encourage motility, but even those have produced no results.  According to the doctors, the only thing we can do for his intestines is wait for them to start moving again.  It could be days, weeks, months, a year...they don't even have a guess at this point.  So far there are no indications that Samuel's intestines will be back to normal soon.  There have been times where we thought maybe there were signs that motility was returning, but, if anything, things have gotten worse.  Samuel's girth has slowly been creeping up over the last several weeks from 33 cm to 42.5 cm.  His bowel loops have become increasingly distended as more and more air fills them without any escaping.

So we wait...
We wait for God to return normal motility to Samuel's intestines.

In the meantime, the doctors have said there is really no point in us waiting in Delaware, so far from home, so we have put in place a plan that, Lord willing, will allow us to make it back to Arkansas "soon".

While we wait, Samuel will have to remain on the ventilator due to the competition his distended abdomen is putting on his lungs.  Samuel will also not be able to eat during this time, since nothing can pass through his intestines.  So we had to make some decisions for long-term care.  Tomorrow (Wednesday) morning at 9 am EST (8 am Arkansas time), Samuel will be having his 3rd surgery - a tracheostomy and a central line placement.
Having a trach will allow Samuel to get the ventilatory support that he needs, without the negative effects of being nasally or orally intubated long-term (countless re-taping jobs on his face, very few cuddles with Mom and Dad, keeping him on sedation meds so he doesn't pull out his tube, risk of permanent damage to the voicebox, etc...).

We will finally see his face free of tubes and tape for the first time ever!  After 99 days, I am so ready...
We will be able to give Samuel so many more cuddles with his "stable" airway! No more waiting for our nurse to get the doctors permission and then gather a team to help get Samuel safely out of bed.
Samuel will be allowed to move his head for the first time on his own!  He will be able to get in so many more positions, and have the opportunity to develop skills like a normal baby!

The central line that will be placed in his chest will allow for easy long-term access for his IV nutrition that he will be dependent on until his intestines begin to work.

It may still be several weeks after this surgery before we are able to transfer back to Arkansas Children's Hospital, and probably at least a month or two after that before we can go HOME, but this will get us one step closer.  And hopefully within that time, Samuel's intestines may begin to function again.

Please be in prayer for Samuel as he goes into this surgery.  Although this is a fairly "routine" surgery, the last "routine" surgery we put Samuel through ended up revealing a whole other set of problems...which is why we are at this point.