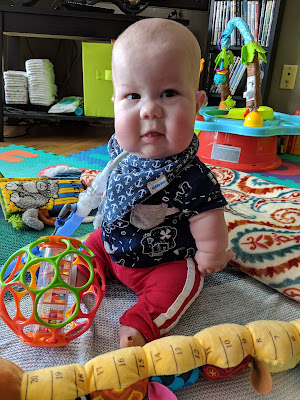 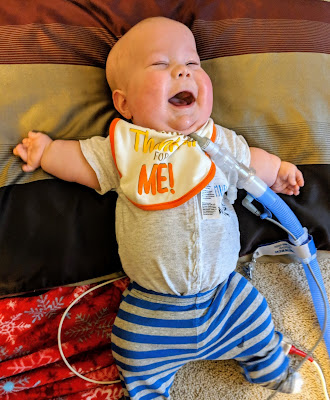 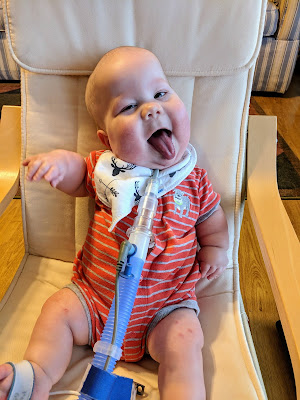 I'm not quite sure where the time went, but I am thankful for every single day - all 365 of them!

Early in the morning on February 27th, 2018 - after 29 days of full bed rest, 17 days of being in the hospital, 11 days of waiting since my water had broken, and roughly 9 hours of true labor - Samuel David was born.  He was 6 weeks early, weighing in at 4 lbs. 13 oz. and 17.5 inches long - we were all amazed by how BIG he was for being so early, as the ultrasound just 4 days earlier had estimated him at 3.5 lbs.
He came into this world without making a sound - no crying was heard.  I didn't get to touch him.  I hardly even saw him as the doctor quickly lifted him up at the end of the bed for me to get a look, and in the same motion placed him in the arms of a nurse who immediately turned and hurried out of the room - an entourage of people following.  Seth leaned in to praise me, encourage me, offer words of hope in that moment...and I quickly pushed him away - reminding him that we had firmly decided beforehand that he would stay with Samuel the whole time, and he was already out of the room.

Samuel David made his appearance at 3:35 a.m., and before the clock turned to 3:37 I was left all alone in that delivery room.  The team of about 15 doctors, nurses, and respiratory therapists had all disappeared.  Seth had rushed out (at my urging) to chase after our son.  And I was left with the memories of that one quick glance.  To be honest, all I could remember was how much dark hair he had!  I wasn't able to get a good look at his face, it all happened so quick.

Each moment that followed was filled with heartache and joy, existing hand-in-hand.  My heart was aching to hold my son and love on him, but I was filled with joy that he was finally here - that this stage of the journey had begun - and I knew that if he were to be placed in my arms too soon, it would be to say "goodbye"...So as each minute ticked by I tucked the longings of my heart further and further away, allowing them to be replaced with hope.  Each minute that ticked by brought new hope, as it was one more minute that the medical team must have thought that Samuel could be helped - that just maybe he was compatible with life after all.

You see, if in their initial assessment they didn't think they could save him - his lungs too small, body too frail, heart too complex, causing him not to respond well to initial interventions - the plan was for them to rush Samuel back to me as quickly as possible so that we could spend some moments as a family while he was still here with us.  But, if intervention was working...If he was able to breathe on his own long enough for them to get him intubated.  If he could keep his sats up after intubation.  If he responded well to the prostoglandins.  If....
There were so many "ifs".  But I knew with each passing second that he must be checking off those boxes, because otherwise he would be back in my arms - for the last time.
So as the ache in my heart intensified, hope grew alongside of it.

30 minutes later (which seemed like so much longer) Seth texted me a pictures of Samuel: 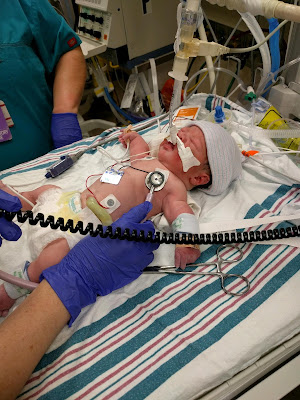 A picture that broke my heart and melted it all at the same time.  He looked so helpless, yet he was here, and he was alive!  I stared at that picture for the next 3 hours as I waited for them to finish stabilizing Samuel and preparing him for transport to Arkansas Children's Hospital, 5 minutes down the road.

My mom arrived at 6, so I was finally not alone.  Then, just after 6:30, Seth walked in with an incubator following close behind.  We were able to spend 2 minutes with our sweet son by my bedside.  They opened the side of the incubator, and I was able to stick my hand in to touch his tiny fingers. 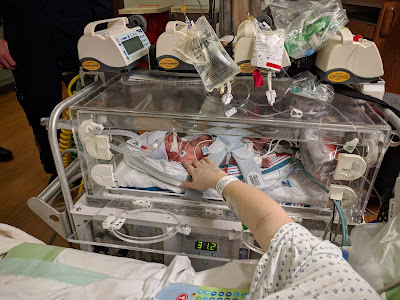 My heart continued to simultaneously break and melt.  I knew they would be taking him away at any moment, and I was desperate to be discharged as quickly as possible so I could be with my little family.  I was thankful that Seth would be able to stay with him the entire time.

A little over 12 hours - and a million texts back and forth with Seth - later, I was discharged and finally able to head to the children's hospital so we could be reunited as a family. 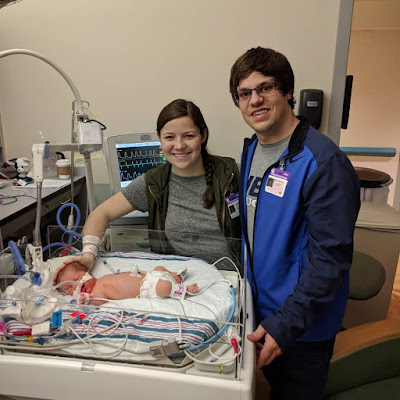 It was late.  We were exhausted.  But we were together.  And there was hope of living another day with our son.  Although we weren't able to touch him much that night, I did get to place my hand on his head, feel his soft hair, and just let him know that we were there.  Although it would be another 3 days before I was allowed to hold Samuel for the first time, and although those moments would be few and far between over the first 4 months of his life, we learned to cherish every little detail of every little moment - and the joy God allowed us to find in each of those moments carried us through. 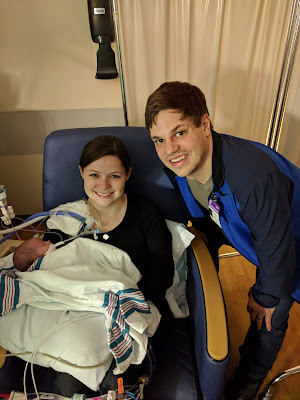 Around midnight we decided that we should probably leave to get some rest, and that was the hardest thing I had ever done up to that point.  We would BOTH be leaving him this time.  And it was heartbreaking.  In the coming days, weeks, and months we became very accustomed to this routine (although it never got easy).  There were some nights that we pulled shifts staying bedside, but we weren't allowed to sleep in the units so it wasn't sustainable.  We spent February through the first part of September leaving our son late every night, and getting up early each morning to head straight back to the hospital.  In September, when Samuel was finally moved out of an ICU for the first time and put in a private room, we were beyond thrilled to finally be able to stay with our son 24/7 - no longer having to say "goodbye" and wonder how he was doing throughout the night.

One year later the heartache of all of these moments seems so far in the past.  We are so grateful for all of the "firsts" that God has graciously allowed us to celebrate over this past year!

I know many of y'all followed our blog or found Samuel's story on Facebook from the very beginning (you can find his Facebook page by searching "His Story, His Glory - Samuel David's Journey" on Facebook), but some were not here during those first days.  No matter when you joined our journey, know that we are so grateful for each of you for rallying around us and praying us through the hardest days of our lives!

Some time in the next week I hope to post a recap of Samuel David's eventful first year of life!

One year into this part of our journey, and we still boldly proclaim that....