No Happiness or Luck Here 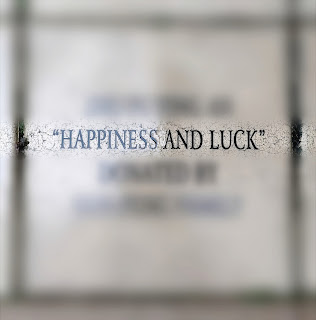 This phrase is etched into one of the bricks in the courtyard of the hospital.  How grateful I am that we don't depend on these 2 things!  If happiness was our goal in life, these past 18 months would have broken us.  It would be impossible to remain happy all the time during the heartache we have experienced and along the long medical journey that we are on.  If we were dependent on luck, Seth, Samuel, and I may be considered some of the unluckiest!

But instead of these unreliable, emotional things, God promises joy in place of happiness!  He promises hope and a future with Him, rather than relying on luck for our fortunes!  Praise God for these gifts!

There are many days when I don't feel the slightest bit happy - days when I can't even pretend to smile - days when I have a painful lump in my throat and choke back tears constantly.  But joy?  The joy that God gives is always with us.  It's the reason that Seth and I have found ways to laugh during some of the most painful of moments.  Joy is what allows us to see and be grateful for the blessings in the midst of the storm.  We may not be on a journey that we ever hoped for, but God has been faithful to provide us with joy!


"And do not be grieved, for the joy of the Lord is your strength."
Nehemiah 8:10b

We are not dependent on luck because God has ordained every moment of our story!  He is intricately involved, and is using all of it for a purpose!


"For I know the plans I have for you, declares the Lord, plans for welfare and not for evil, to give you a future and a hope."
Jeremiah 29:11

So instead of "happiness and luck", today I am thankful for the JOY and HOPE that God gives!

The end of last week turned out to be rather eventful for Samuel.  He just likes to keep us on our toes!
Last Thursday was the first day in almost 2 weeks that he didn't have a fever!  We were so excited to see Samuel feeling so much better!  But around here it seems that as soon as one thing resolves, something else pops up.
That night, after a great day, Seth and I noticed that Samuel's tunneled central line in his chest (the one they were planning to send us home with back before they realized Samuel's belly was fixable - the one that was supposed to last long-term) was leaking.  They took an x-ray and saw that it was no longer central, and had slipped completely out of the artery.  They decided that it would be best to still have central access, but instead of doing another tunneled line (since Samuel won't be on long-term TPN anymore!) they would just give him another PICC.  They stuck him for an IV just to get through the night, then Friday morning we had to send Samuel off for another PICC procedure.
But before we could do that, we noticed when we came in on Friday that Samuel had a rash up the right side of his body. Large red spots that were hard to the touch and painful for Samuel.  In the moment, it again felt like everything was against us, like Samuel just can't catch a break...
But God is continues to show us grace!
Not only did the procedure on Friday go well, but by Saturday night the rash (that none of the doctors could identify) was beginning to disappear!  Samuel remained fever-free all through the weekend and the first part of this week, and we saw so many smiles during that time and shared so many cuddles!

But then yesterday (Thursday) Samuel had another fever, and today he has been running high as well.  After a week of no fevers, we hoped he was in the clear, but now we're left wondering again.
One day at a time!