The Results Are In...and God is STILL Faithful!!!

After 4 long months of wondering and waiting, we finally have an official diagnosis.  In a way, this is such a relief!  Putting a name to it allows us to research.  It helps us to feel more informed.  It takes away the fear of facing something unknown.

But at the same time, the name that it has been given drives fear into our hearts.  Somehow it makes all of Samuel's medical problems seem more real.  It makes him seem more vulnerable.  It makes the road ahead seem so long...

This is the fancy paper that was given to us by the geneticist just a few days ago: 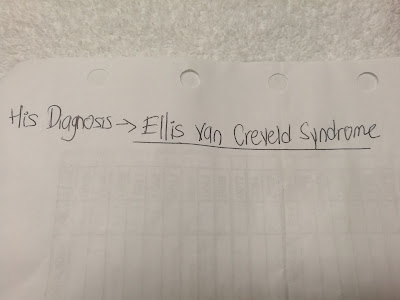 Six simple words quickly scribbled on a piece of scrap paper to tell us that our son has a very complicated diagnosis.  Ellis-Van Creveld Syndrome (EVC) is a rare form of skeletal dysplasia that is said to be lethal 30-50% of the time.  There are only a few hundred known cases in the world.  Samuel is one of those.  The 2 things that sometimes make EVC lethal are the narrow chest, which can restrict the growth and proper function of the lungs, and the fact that it is usually accompanied by some kind of heart defect.

Despite the daunting statistics and the many other things that accompany EVC, God has already shown Himself faithful even through this diagnosis!
Back in December when we were first told that Samuel had some form of skeletal dysplasia, I naturally started googling.  During that time I ran across numerous blogs, but there was only one that I continued following and went back to numerous times.  In God's divine providence, that blog just so happened to be written by a lady who has 2 daughters with the exact same rare diagnosis as Samuel.  I was able to reach out to her, and she put me in touch with a doctor who has worked a lot with EVC!  This is huge since EVC is so rare, because many doctors have never dealt with it before.  This doctor is now collaborating with our team of doctors here, and has also pulled in other doctors who have worked with EVC.  We know this "random" connection was ordained by God!

Tomorrow afternoon (Tuesday) at 2, our team of doctors here are going to be conferencing with several doctors who have dealt with EVC, and will be working to put together the best plan of care for Samuel.  Please be in prayer that God will give these doctors wisdom!

In the meantime, a HUGE step forward was made today, as Samuel was able to be taken off the oscillator!  This is a BIG deal because the cardiologists said they couldn't even discuss surgery for Samuel until he was off the oscillator.  So far he is doing great on the normal ventilator, and we are praying that his levels will continue to hold steady!

Please pray with us...