Samuel is out of surgery, and this is the reality of what it looks like. 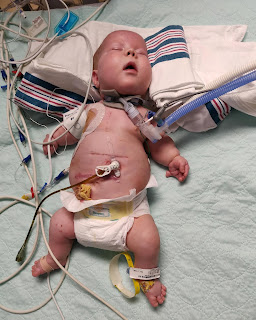 But the good news? The wonderfully joyous news that has had Seth and I in tears??

The surgeon said he has only seen something like this when a baby is born that way, but since Samuel's intestines seemed to work fine for the first 8 weeks of his life, he has no idea what would have caused this to occur later on. He said it was very "bizzare"!

The surgeon went ahead and performed an ileostomy because he couldn't connect the 2 parts of the intestines right now since the upper portion is so dilated, and the lower portion is much smaller. Lord willing, in 3 to 4 weeks they will be able to go back in and reconnect them!
In the meantime, we are praying that Samuel will rest and heal up well from this surgery, and be able to start feeds in a few days!

God's grace is so overwhelming! We will continue to praise Him on the hardest of days, and in the most joyous of moments!

Thank y'all for praying with us!!!