I promise I am not trying to only do monthly updates, but this past month has kept us busy! Maybe some time I will try to do a post on what a day-in-the-life looks like here, so y'all can see how full our days are. I have so few long stretches of time where I can sit down and write a post, so I have written a lot of unfinished ones over the last month. But I want to keep y'all updated because there have been a lot of exciting things that have happened! There are also still many prayer requests, and we have so appreciated having each of y'all on this journey with us knowing that y'all are lifting us up before the throne of God.

But before I tell you about the SUPER exciting news...here is a picture/video summary of some other exciting things that happened over the past month!


September 1st
Samuel had his first really big belly laugh! It was such a special moment seeing him shake with joy! After a few minutes I began to cry. Tears of joy for seeing my baby laugh, but also tears of longing as I desperately wish we could hear his sweet laugh. 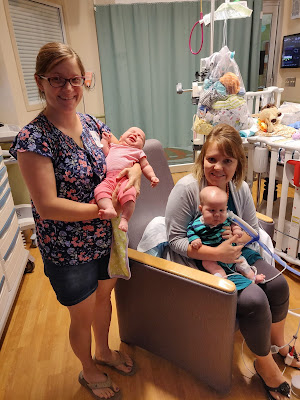 Samuel had his first babysitters! My sister and a sweet friend of ours from church (both of whom are nurses!) drove down to see us and let Seth and I go out on our first date away from the hospital in a long time! We were so thankful for the time to step away while knowing Samuel was in good hands! 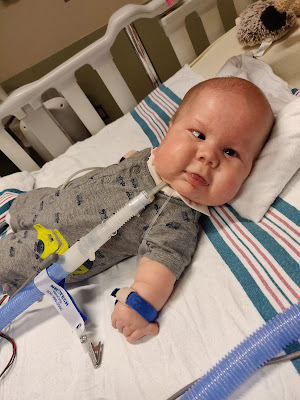 Samuel successfully transitioned back to the home ventilator! We are SO thankful that they put him on it for the last 3 days in Delaware, because when they transitioned him here Samuel actually failed within the first 10 minutes. BUT because he had successfully been on the home ventilator in Delaware, we were able to tell them 3 specific things that had been different at the other hospital. After a couple of hours of gathering the right supplies, they tried Samuel on the home ventilator again and he has been on it ever since! Yet again, God's hand at work! 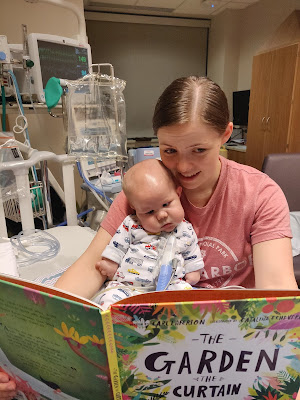 We were given a new book today by some dear friends who came to visit! It is such a good book for kids over-viewing creation, the fall, sin, and God's plan of redemption!
Samuel loves to look at books as we read to him! 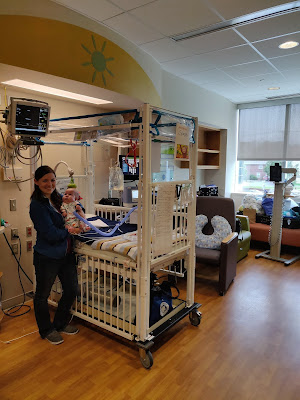 Today we moved out of the CVICU, down to a non-ICU floor! This is Samuel's first time EVER to not be in an Intensive Care Unit! He spent the first month of his life in the NICU at ACH, then the next 5 months in the CICU (cardiac ICU) in Delaware, and was then transferred back to the CVICU (cardiovascular ICU) here at ACH. It was so strange for us to be in a room with fewer monitors and beeping! But now that we are here we officially begin our transition home!

September 8th
Today Samuel really began interacting with his tongue! His favorite game for about a week was sticking out his tongue and smiling, especially when he would see someone else's tongue! He thinks tongues are pretty funny! 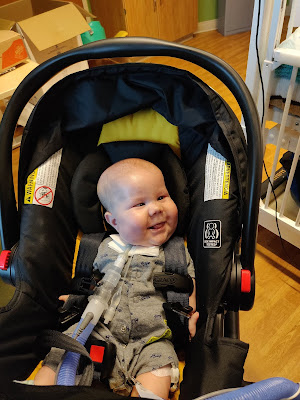 Today we put Samuel in his carseat for the first time ever! He has to start preparing for the 3-hour ride HOME! 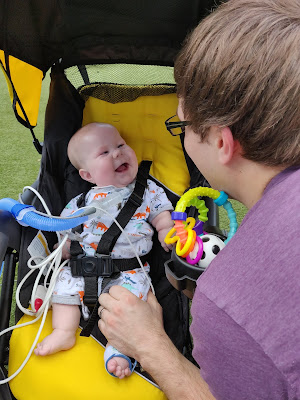 Samuel went on his very first stroller ride! We got to take him outside, and he was all smiles!

September 16th
Samuel found a new favorite game of cracking himself up with his own serious face! He had us laughing so hard! 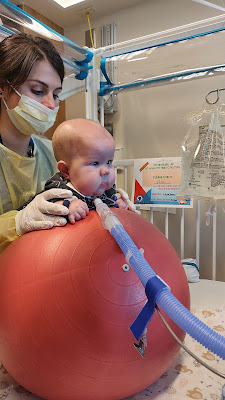 Samuel did tummy time on a ball today and tolerated it for 5 whole minutes! This is a big deal for Samuel! Because of all the surgery's he has had on his belly/chest area, his front side is very sensitive so he has never tolerated tummy time. He wasn't even able to do tummy time much until just the past couple of months. It took distracting him with live music, but he showed great improvement! 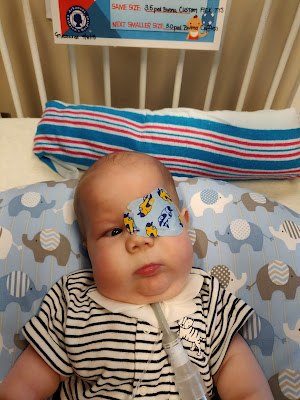 We have been waiting for ophthalmology to see Samuel for a couple of months now, but apparently it is very hard to convince them to see someone who is inpatient. We are thankful they were able to do an exam for him, and we are now patching his strong eye for 2 hours every day. Although he is not the biggest fan, he has been a trooper, and we have already seen improvements! 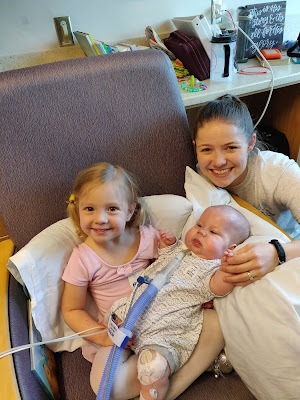 This morning Samuel had an MRI of his brain because there has been some concern that he has more fluid on his brain than usual. The MRI confirmed this. However, as of right now it is not causing too much pressure, and Samuel is not showing any signs of it effecting him. So it is something we will just have to keep a close eye on. Samuel did so well for the MRI in the morning that he was still able to go on his scheduled stroller outing that afternoon. Several of my family members drove down to join us - including Samuel's grandparents, a couple of aunts, and 3 cute cousins! His cousin Amelia, in particular, has been anxiously waiting months to finally meet "baby Samuel" (who she so sweetly remembers to pray for daily!) and she was so excited to hold him! 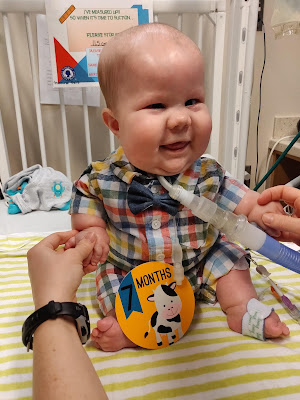 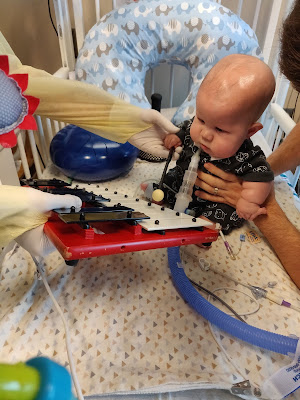 Samuel LOVES his music therapy! Music helps get him through some of the hard things that he has to do daily.

Those are just a few brief highlights...

But now onto the SUPER exciting NEWS!

We have been back at Arkansas Children's Hospital (ACH) for almost 6 weeks now, and D-day is being discussed as a reality!

Instead of simply talking about it as some future event down the road discharge now has more of a timeline, and....are you ready for this??

It may be less than ONE WEEK AWAY!

Could it change? Absolutely. In fact, many would probably expect it to change, especially considering Samuel's many complicating factors. It is dependent on Samuel remaining stable, not getting sick, ensuring that his electrolytes stay in a good range, and passing his 3-hour car seat test. All of our medical equipment and supplies also have to be delivered in time, and there can't be any hiccups with insurance. All that to say, we are simply not letting our hopes get too high (something we have become very accustomed to doing), yet at the same time living expectantly and preparing as if it were happening any day!

Lord willing - if all stays on track - we may be taking Samuel HOME with us for the first time ever in six days - October 8th.

October 8th of last year was the day we would have been welcoming our first baby - Penuel - into this world. But God had other plans.
Last year I dreaded the arrival of October 8th. Last year that date was full of tears...
This year? This year October 8th is once again a much-anticipated date! This year we are hoping that October 8th is the day we get to stop living in hospitals for the first time in over 8 months, and take our precious son HOME with us! God is once again redeeming a painful day.

As we prepare to transition home, my family has been working tirelessly to get our house ready so that we haven't had to make the 3-hour trip home, away from Samuel.
Our house that we left spur-of-the-moment over 8 months ago. Our house that didn't have a nursery set up because we still had 10 weeks before Samuel was supposed to arrive and we hadn't had any of our baby showers yet. Our house that now needs to be sanitized, set up, and prepped for a medically complex child to live in!

Many of y'all over the course of this journey have asked ways you can practically help, and there hasn't really been a lot for people to do long-distance. But, for those who have been anxious to help, we do have baby registries set up on Amazon.com and Walmart.com with some of the many supplies we still need to get. We need lots of the typical baby stuff like crib sheets and baby soap, but we will also need many non-traditional things for Samuel - like pipe cleaners to clean his trachs, bins to keep in the refrigerator to organize his meds and his milk that he is fed continuously, and hand sanitizer to protect our medically complex son from a cold that could be life-threatening to him. We are slowly gathering all of the things we will need to properly care for Samuel, and it makes it feel more real that we may actually get to bring him home with us!

But, while we can't wait to go home, we also don't want to rush out of here if Samuel is not ready. Please pray with us that it will happen in God's perfect timing!