So Close, But Still Further to Go!

We have now been back at Arkansas Children's Hospital for a little over a week!  And the fact that I have failed to update until now might clue you in to what kind of week it has been.

The good, the hard, the surreal.

First of all, Samuel did so well during transport!  He slept for a majority of the flight and two ambulance rides, after only one small dose of extra sedation.  A world of difference from when he was transported up to Delaware in March! 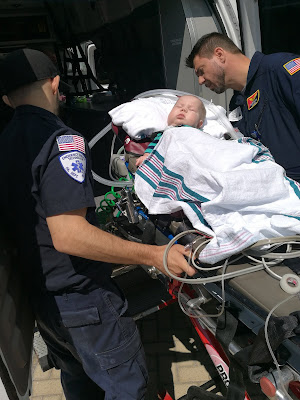 Since being at ACH, Samuel has already made some progress!  He is now completely off of another sedation med, leaving him with just one more!  He has also handled some major weans on his ventilator settings for the first time since April!  They took him off of the home ventilator when he got here, just because they have a different method of doing things.  But hopefully Samuel will continue handling some vent changes throughout the coming week, and will be put back on the home ventilator within the next few weeks.  One step at a time!

Other exciting news?  We have an actual room!  A room with no other patients.  A room that has doors.  A room that we can sleep in with Samuel!  Six months of staying by his bedside from early in the morning to late at night, every single day.  Six months of having the heart-breaking task of saying "goodbye" every night, not being allowed to sleep by his bedside.  Now, after six months, we finally get to wake up to Samuel's wiggles and alarm sounds in the middle of the night!  While many parents of young children are desperate to get a good night of sleep, Seth and I have been dreaming of this night! 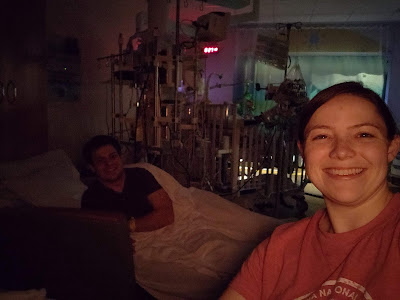 While there has been progress made, it's still possible that we are months away from going home.  We hope that it's sooner than that, but we've been told to not get our hopes up.  They don't get in a hurry when it comes to discharging children who have trachs.  There is in-depth training that has to be completed (a lot of which we did in Delaware!), medical equipment that has to be acquired for home, insurance to deal with for setting up monthly medical supply deliveries, mandatory home nursing slots that must be filled...we have to find a pediatrician, cardiologist, pulmonologist, GI specialist, nutritionist, therapy services, and a DME company close to home.  Lots to do, and it all takes time.  So as we wait, we will continue to see how much Samuel's lungs can be challenged.  So far he's taken some good strides, and we think he's up for the challenge!  God continues to give him strength! 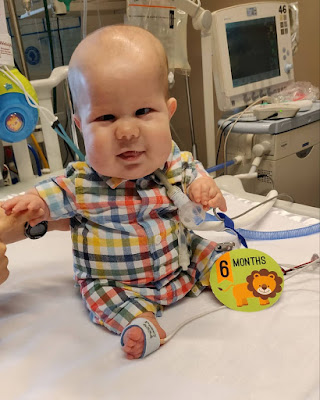 But we are exhausted.  Mentally.  Emotionally.  Physically.  This has been a hard 10 days.  We have often been the communication bridge between the doctors who have been working with Samuel for the past 5 months, and the doctors on our new medical team in Arkansas.  We are on high alert for changes they want to make that we know are not best for Samuel's condition or for babies with EVC in general.  Because we know him best.  We are the only ones who have been with him every day of his life.  We have seen how he has responded to every single change, good and bad.  We know what's worked in the past.  We know his little quirks that may not make sense medically.  We are his greatest advocates.  And that's hard.  It's exhausting.  But seeing Samuel make progress makes it all worth it!  Thankfully, some of the doctors here have helped in the communication with our team from Delaware.  We are so thankful that they are willing to collaborate!  And we are confident that this arrangement will continue allowing Samuel to get the best care possible. 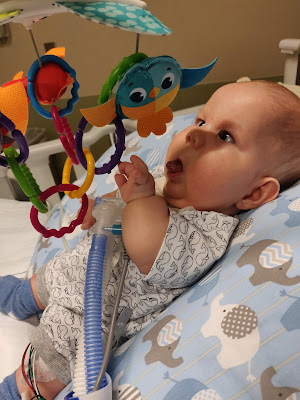 It was very surreal coming back to ACH after 5 months.  As soon as we entered the hospital it was like we had never left.  These hallways are all too familiar.  But at the same time everything was so new and different.  We're in a different unit this time, with a new medical team, and new ways of doing things.  Now that we are back here, our time in Delaware already seems so long ago!  But while we were there it felt like we had been there for well over 5 months.  Needless to say, time is a funny thing!  But we are thankful that we are only 3 hours from home now, instead of half a country away. 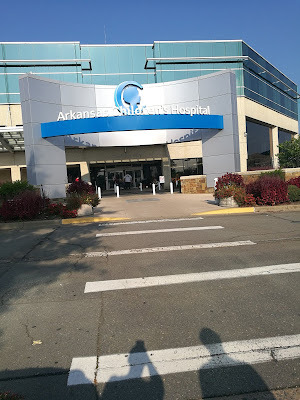 Another exciting thing since arriving here is that a sweet friend of ours surprised us by designing a shirt for Samuel!  We are so excited to have a shirt to wear that will be a conversation starter to point others to the glory of God!  These shirts will also help to offset medical expenses and our day-to-day costs of living away from home.  If you would like to buy a shirt you can click on this link!

I think you can only buy them through the end of this weekend, so don't delay if you would like to have one!

I cannot express in words how much each of y'all's prayers mean to us.  We know God hears each one, and He has continually provided us with strength along this journey!