A Stone of Rememberance

One year ago yesterday, April 20th, Seth and I walked into our doctor's appointment with so much anticipation and joy, only to find out that our precious second child, Jahleel, no longer had a heartbeat.  We found ourselves thrown back in the midst of unimaginable grief, less than 3 months after losing our first child, Penuel.  April 20th has been etched in my mind as a day I will never forget.  A day that continued a season of deep mourning and grief, but also a day that began to teach us what it meant to truly trust God.

We didn't get the miracle we wanted that day...and we had no idea whether God would ever grant us the joy of holding one of our children.

This year April 20th had a different tone to it.  We walked into the hospital yesterday with anxious hearts and desperate prayers as we spent time with Samuel before they wheeled him off for surgery.  Little did we know that this time we would get a miracle that we weren't expecting! 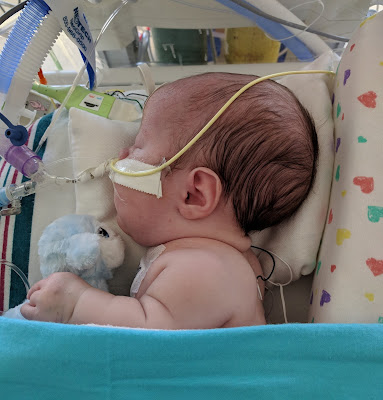 Earlier this week, the EVC team in Deleware decided that the next best step for Samuel, after recovering well from heart surgery, would be to get a G-tube.  This more permanent feeding tube will ensure that Samuel gets the exact amount of nutrition that he needs.  On Wednesday they did a scan of Samuel's upper GI tract to make sure that everything looked normal, but the results were not what we hoped.  From the scan it looked like Samuel's intestines had some degree of malrotation, which could cause major problems down the road. This news meant that there would be an additional part to the surgery, where they would need to tack Samuel's intestines in the right place to ensure proper function.  This would also mean a longer recovery time, and a longer waiting period before Samuel could start feeds again.  While this wasn't what we wanted to hear, we were confident after talking to the surgeon that they would be able to fix it, and it would only be a short-term setback.

I was confident in the surgeon.

Did I pray?  Absolutely!  We prayed non-stop.  But I'm ashamed to say that I don't ever remember asking for Samuel's intestines to not need any work.  While praying for a miracle doesn't mean that will happen, I believe that not praying for a miracle shows a lack of faith - faith in what God CAN do.

God proved yet again that He CAN heal without the need for doctors and surgery, and sometimes He chooses to do just that.

During the surgery it was revealed that Samuel's intestines were already twisted the right way!  There was no malrotation!  They were able to put in the G-tube without any other interventions, and Samuel came through his second surgery successfully!  They were able to start his feeds back last night through his new hardware, and today he is already back up to his full feeds.  He has another scar now, another reminder of the ways God has healed and protected him, but Samuel is doing so much better than many doctors ever anticipated.

As crazy as it sounds, I needed that reminder.  After all of the healing God has brought about on Samuel's behalf - some by way of modern medicine and some miraculously "unexplainable" - I still have moments of doubt.  I have moments of fear.  I have moments of despair.  Through it all we have proclaimed that God is good and faithful, and that is true whether or not we get the miracles we want.  Because we didn't get the exact miracle we wanted...we wanted the miracle where Samuel was born PERFECT by medical standards - requiring no hospital stay, surgeries, or medecines - but that didn't happen.  And because of that, I am confident that God has received more glory through Samuel's "broken" body than He would have otherwise.  This is not the story we wanted, but we know that it will produce the results we prayed for - God receiving glory through Samuel David's life!

Despite all that God has done for us on this journey, I still sometimes forget...but yesterday will always be a reminder.

Yesterday we got a miracle, graciously given by God.  A reminder that He is with us in the trenches.  He is with us in the mundane.  He is with us even when we forget to rely fully on Him.
Yesterday God redeemed April 20th - turning a day of mourning last year into a day of gratitude.  Yesterday was a day from which we picked up a "stone" and laid it on our altar to remind ourselves, and everyone else, that God is good, no matter the outcome.


'So these stones shall be to the people of Israel a memorial forever'...And those twelve stones, which they took out of the Jordan, Joshua set up at Gilgal. And he said to the people of Israel, "When your children ask their fathers in times to come, 'What do these stones mean?' then you shall let your children know, 'Israel passed over this Jordan on dry ground.' For the Lord your God dried up the waters of the Jordan for you until you passed over, as the Lord your God did to the Red Sea, which he dried up for us until we passed over, so that all the peoples of the earth may know that the hand of the Lord is mighty, that you may fear the Lord your God forever."
Joshua 4:‬7b‭, ‬‬20‭-‬24