Yet again our timeline was unexpectedly changed because...

Monday afternoon my slow leak of water suddenly became a rupture.  I lost all of the amniotic fluid, and my body very quickly went into labor.  Samuel stayed in the perfect position, tolerated labor well, and I was able to have him completely naturally!

As soon as he was born the doctor held him up for a brief second so I could see him, then immediately whisked him away to another room where they assessed him, intubated him, and gave him IVs, in order to prepare him for transport to Arkansas Children's Hospital.  Seth was able to stay with Samuel the whole time!

2 hours later, after they finished up, they brought Samuel back by my room so I could touch him in the incubator before they left.  It was heartbreaking to not be able to hold him and only get about 2 minutes with him before he was taken away, but we knew going into it that had to be the plan. 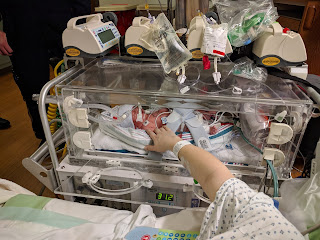 I was released from the hospital that evening around 6, and was finally able to join Seth and Samuel in the NICU at the children's hospital! 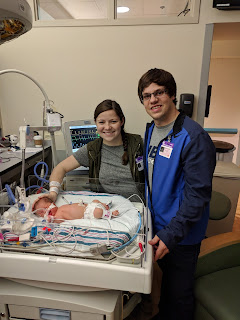 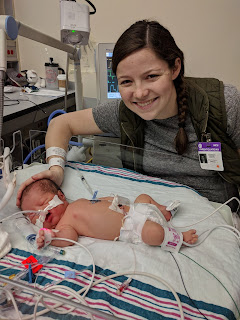 He is in stable condition, but it looks like he has a long road ahead of him.  He has already been through multiple ultrasounds, x-rays, and an echocardiogram.  He has his blood drawn multiple times every day through a UAC line (a tube inserted into his belly button).  He is on a ventilator since his lungs are small, and his chest is narrow.  He gets his nutrients through a PICC line.  He receives regular antibiotics...

As a mom it is beyond hard to see him laying there so helpless, with tubes, wires, and IVs everywhere.  I want him to know life beyond those things! I want him to know that life is not full of hospitals, and needles, and ventilators.  I want him to know what it feels like to be held.  I want him to hear the sound of his own cry.  I want him to know what it feels like to be comforted.
This momma's heart is aching...I am so beyond thankful that we have Samuel David here with us, but I have to ignore so many basic instincts.  When he cries, no sound comes out because of the ventilator, but he looks so sad and uncomfortable.  All I want to do is pick him up to console him, but I can't.  We have to be careful touching him too much, because if he is overstimulated his respiratory rate goes too high.  His little mouth will start making sucking motions and all I want to do is feed him.  I want his grandparents, aunts, uncles, cousins, and friends to be able to meet him, but because of flu restrictions Seth and I are the only ones allowed to see him.  I long to see his precious face free from tubes.  I long to hold his sweet little hands without worrying about IVs.  I long for so much more for his little life...

My eyes have been swollen from crying over the past few days...but my heart has also been filled beyond measure.  Oh, how we love this little guy!  We are so thankful for every second, every minute, every day that we get with our Samuel David.  Each one is a gift, each one is one more than we might have had, and we are not taking a single moment for granted.

I will write up a more detailed post about his medical condition and next steps soon, but I wanted to let each of you know that Samuel has arrived, and Seth and I are so thankful for all of the prayers that got him here.  We have already seen so many miracles throughout the pregnancy, his birth, and his short time here!

One of the things we had specifically prayed for every night was that we would hear him cry when he was born, and that would indicate strong lungs.  Well he didn't cry right when he came out, and they took him away so fast that I didn't hear him cry before they left the room, but Seth sent me a video from when they were preparing Samuel for transport - but before they put the breathing tube in - and it was the sweetest sound of our precious Samuel crying!
God answered that prayer!  And we know that He will continue to answer prayers as we walk this journey.